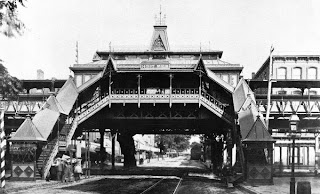 With Oliver Allen, Deborah Allen and Frederick Allen we discussed rail in Manhattan, the many transformations of landscape that transit and economic trends have brought about.

Here, some images of structures no longer extant in Manhattan, but which in their day were impressive testaments to the ever-evolving urban landscape.

Above, the 6th Avenue el station at 14th Street. 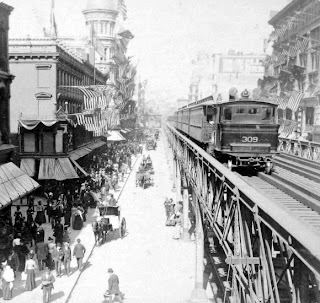 A view of an engine and cars on the 6th Avenue El, in the "Ladies Mile" portion of the avenue. 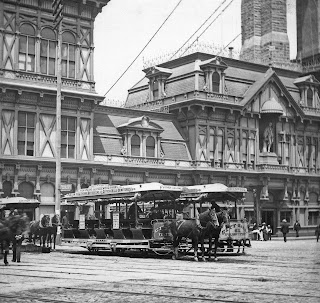 At left, the Fulton Ferry Terminal, with horse-drawn rail cars waiting to whisk passengers (at a spry 6 miles per hour) away to their destinations, after debarking from their brief ferry ride across the East River.

Washington Market in the mid-19th century, on a site later occupied by the World Trade Center. 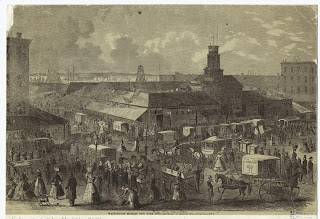 Images for September 10th: Tales of Architecture in the Tradition of Vasari 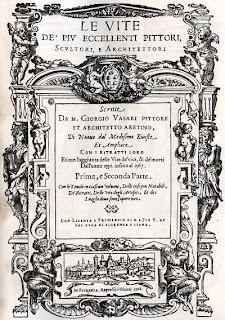 Late breaking update: no sooner had I spoken of Ray and Charles Eames, and their movie The Powers of Ten but that Alice Rawsthorn's article about the Eameses and this very movie appeared in the Sunday Times supplement!

Talk about having the pulse of that aspect of contemporaneous context - of being zeitgebundet - of which I also spoke~!

Here's the link to the Times article:
http://www.nytimes.com/indexes/2009/09/13/style/t/index.html#pageName=13rawsthorn

Back to the original thread of images to accompany the chat of September 10th: 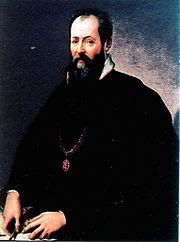 Giorgio Vasari, architect, painter and author of "Lives of the Artists" circa 1550, in which he chronicled - and commented upon - the quirks and personalities of the Renaissance. In fact, it was Vasari who coined the term - "rinascita". 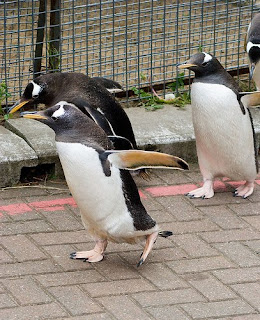 John Hejduk's favorite dismissal of poor student work - "it's a flat experience" and the story of marching with the penguins is one of my least opaque experiences of the long-time dean of Cooper Union.

Here's a fairly indicative snapshot of Hejduk, taken before his renovation of the Cooper Union Foundation Building - the gesturing, the sweater, the tie - all vintage Hejduk. Note the original wall decorations in the background, all of which were removed during that modernization: 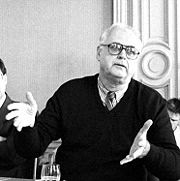 The sort of presentation drawing so in vogue (and expected by Mr Graves when he visited our museum design class at Harvard Design School) at Cooper, Princeton and Cornell in the 1970s are best illustrated by these drawings, contemporaneous with Jefferson Airplane's White Rabbit:

A Hejduk drawing - Half House 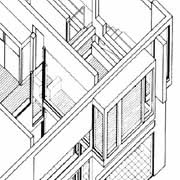 And as seen in an early Eisenman drawing.


And last, as a parting image - Ray and Charles Eames (for you cannot speak of one without the other.) 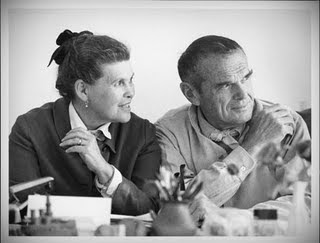 Thanks for listening. Remember that our programs are now available as podcasts on iTunes, and through the station website:


But, as a footnote - Jerzy Soltan's limerick, to be used only at an Italian stone quarry:

I leave it to you, dear listener, to determine how best to use this limerick.

Curtis B Wayne
No comments: